This graph appeared in yesterday's New York Times and I found it fascinating: 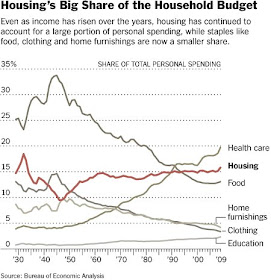 Look how much the share spent on food and clothing increased during World War II, and how much lower they are now than at any time since. And I was surprised to see the share spent on education being quite low, and not showing as much of a spike in recent years, despite other stats that show the price of college skyrocketing. This could be because not everyone goes to college, and because although the rack rates for tuition have skyrocketed, more and more people get financial aid in various forms to cover a lot of it. And of course health care costs have risen hugely, after being quite stable through the '30s and '40s-- but it still surprises me that on average we spend more on health care than we do on housing.

The article the chart accompanied mainly focused on the housing part of the budget, and whether this data suggests housing prices have stabilized or are still likely to fall. David Leonhardt says:

I can’t claim to clear up all the uncertainty. But I do want to suggest a framework for figuring out whether you lean bearish or less bearish: do you believe that housing is a luxury good and that societies spend more on it as they get richer? Or do you think it’s more like food, clothing and other staples that account for an ever smaller share of consumer spending over time?

If you believe housing resembles a luxury good, then you’ll end up thinking house prices will rise nearly as fast as incomes in the long run and that houses today aren’t terribly overvalued. If housing is a staple, though, prices will rise more slowly — with general inflation, as food tends to.

The difference between these two views ends up being huge, and it’s become the subject of an intriguing debate.

After digging into it, I come down closer to the luxury good side, which is to say the less bearish one. To me, housing does not rank with unemployment, the trade deficit, the budget deficit or consumer debt as one of the economy’s biggest problems. But you may disagree.